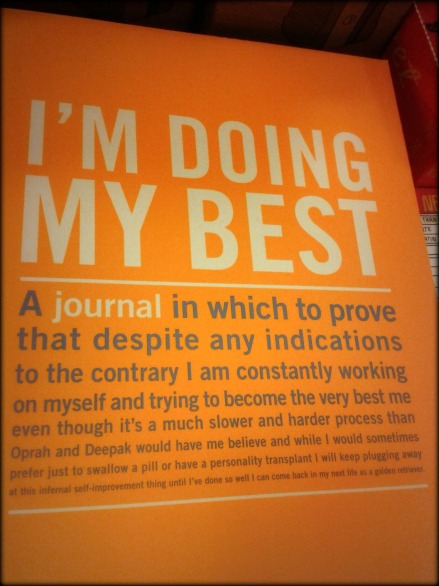 “I’M DOING MY BEST. A journal in which to prove that despite any indications to the contrary I am constantly working on myself and trying to become the very best me even though it’s a much slower and harder process than Oprah and Deepak would have me believe and while I would sometimes prefer just to swallow a pill or have a personality transplant I will keep plugging away at this infernal self-improvement thing until I’ve done so well I can come back in my next life as a golden retriever.”

One of those life philosophy/human condition themed journals you find in the non-book merchandise section of Barnes and Noble. Shallow as it might be, it still tickled my study-numbed funny bone.

I’ll be back with a proper blog post soon, I pinky swear.

Hello! my name is – do you have the time
to listen to a caller’s rhyme?

Night after night, machine after machine,
a voicemail greeting most obscene,
rejection here, a hang up there,
suppressed frustrations everywhere.

“Match that gift-” the managers cry,
while we ask alumni to buy, buy, buy
the security of students future, present, and past
to ensure our beloved school will last-

Oh please! Don’t go! I’ve just begun!
And there goes yet another one.
With every single angry click,
I follow the clock, each sluggish tick.
The second hand is my dearest friend,
the one who leads to me each shift’s end.

Hello! my name is – do you have the time
to listen to a caller’s rhyme?

Dedicated to my fellow call center workers, especially those at university telefunds. A half-assed poem is all the condolence I can offer. Whatever pays the bills.

“Man is least himself when he talks in his own person. Give him a mask, and he will tell you the truth.”

Second of all, I have no second point.

Well, folks, I’ve decided to take a step out of the shadows of anonymity and start making YouTube videos. To be honest, I have no clear reason or idea why. Do I want to expand my brand? Perhaps I’m an attention whore at heart. Maybe it has to do with daddy issues, abandonment issues, Ben & Jerry’s issues, etc. For whatever reason, I have a YouTube account now and I’ve posted my first personal video. I already had a few Richard Dawkins videos up, but I only just recently uploaded one where I show my face.

For now, I have no focus on my YouTube channel. All I know is that this blog will still be my primary outlet of [not so] creative expression. My YouTube channel will be updated even less frequently than this site is. For now, it’s still in the experimental stages. I was just really excited that I got a ukulele and I wanted to share it with the world because I have no friends. Just kidding. Not kidding. Just kidding…

So what did I choose to do for my video debut? Why, sing and play a Monty Python song on the ukulele, of course.


So subscribe to my YouTube channel stressingoutstudent and see the fears, worries, and screaming pathos in 3D*!

Bring it on, YouTube. Let’s see what you got for SOS.

*Not actually in 3D

Taking a break from homework and NaNoWriMo, I came across this video (as did 7 million other people):

If you haven’t been keeping up with the world wide interwebs, the above ad is for Kmart’s Joe Boxer briefs with that commercial flavor of Christmas we all know and love. Hilarious, right? If you don’t think so, please leave. Now.

I’m kidding. I love you. But I’m not sorry to say that if you were offended by it, we likely wouldn’t get along all too well. Unsurprisingly, in this largely coddled and politically correct society we inhabit, many people got their panties in a bunch and unleashed their self-righteousness on Kmart’s Facebook page:

“I wanted to post that I found your new commercial, (male dancers scantly clothed doing a holiday rendition) to be less than family friendly. If you are so desperate for customers that you need to be that degrading then you will probably never bring your numbers back… I will not be shopping your store this Christmas season.”

“Your ad “Show Your Joe” focusing on several men wearing Joe Boxer shorts thrusting to the tune of Jingle Bells is disgusting.

Your commercial is airing during primetime even during Christmas movies on family networks such as the Hallmark Channel, which families will likely watch together. Kmart should be more responsible in your marketing decisions. I am a parent and a consumer I am disgusted by your recent marketing choices.

Get over yourselves, you oversensitive fuddy-duddies with your classy sensibilities and “family values.”

And that’s all I really want to say in a nutshell, lest I get carried away and start frothing at the mouth like some of the commenters on the Facebook page and elsewhere.

To be fair, this isn’t the primary consensus. Actually, more people seem to love it more than hate it, pointing out that this ad is far tamer, less exploitative, and more fun than… pretty much any other ad that features scantily clad men or women shilling products not even related to naked bodies. Does this mean that minor exploitation is acceptable because it’s not as “bad” as a GoDaddy ad? Not necessarily. But it helps put ads like “Show Your Joe” in a broader perspective.

It’s just irritating hearing “think of the children” kind of arguments. As if every little thing that could even so much as be misconstrued as lewd/crass/disgusting/mean-spirited would shatter the morality of any and all children. Are we somehow ashamed or afraid to have to explain to our children what testicles are? That’s messed up. Instead of shielding our children from men shaking their jingle balls in holiday-themed boxer briefs, we should let them absorb it in their own way and give them a bit of guidance here and there. What kid is going to explicitly associate a line of silly men dancing in their underwear to a Chippendale’s show with man candy flopping their Kris Kringles around? “Tee hee, nuts.” What’s so harmful about that? Stop telling our children that genitals are morally icky or whatever…

But the moral fiber of our youth (which still includes me?) is a topic for another day.

Oh, and the woman who called the ad “tacky…” I’m sorry, have you not experienced Christmas in the United States before? Ok. I’m done.

You know I don’t often comment on viral current events, especially concerning people ranting ridiculous on the Internet, but I actually really liked this ad. It made me laugh and I found it endearing (among other things). Stay laughing, my friends.

What do you think of the ad? Do you think Kmart knew it would be controversial? Share your thoughts in the comments.

What? How did this happen? Wasn’t Halloween just yesterday? Where did my jack-o-lanterns go? 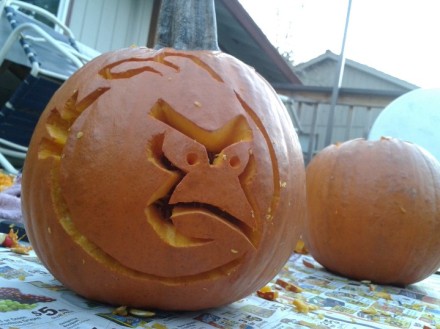 Pretty damn good, if I say so myself.

This can’t be happening. I mean, midterms just happened, but they only just happened! And didn’t I just pass my 10,000 word mark on NaNo? Wait. Oh. I fell behind. Dammit.

According to the handy little stats chart, I’m supposed to reach 30,000 words by the end of today in order to finish my NaNo novel by the end of November 30th. Fu-u-u-u-u-udge me. The second week slump hit me hard, what with those silly things called “midterms” going on in the background. Turns out it’s hard to focus on writing a novel when you’re memorizing the difference between valid and invalid argumentative forms and writing code for a ridiculous program at the same time. I am unworthy of my Asian genes.

What I’ve been doing with NaNo so far is cranking out between 3,000 and 4,000 words a sitting and then letting my “novel” sit for two or three days and then crank out another 3,000 to 4,000 words. This does not a healthy sleep schedule make. Not that I was getting much sleep anyway, what with clips of “Whose Line Is It Anyway?” existing on the Internet. [And no, I haven’t yet seen the revival of “Whose Line”… and I’m not really looking forward to seeing my Ryan Stiles and Colin Mochrie as… old people.]

Maybe I won’t go quite that far. After all, “Whose Line” clips aren’t just going to watch themselves now, are they?

Stay strong fellow Wrimos – the end is nigh! And in other news, how’s life? I feel like we haven’t had much chance to chat lately? How is your day going? No, I’m not going through a mental breakdown. I genuinely want to know about how y’all are doing. Please excuse my rat nest hair and craptastically short update. 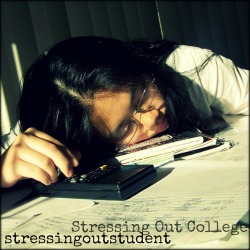